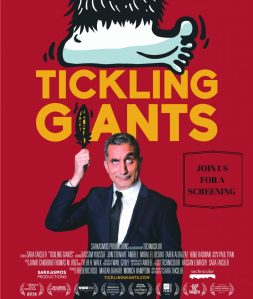 At The Jimmy Carter Presidential Library

Free and open
to the public ($10 donation requested)

About the film: In the midst of the Egyptian Arab Spring, Bassem Youssef creates the satirical show, “Al Bernameg,” which quickly becomes the most viewed television program in the Middle East, with 30 million viewers per episode. But, in a country where free speech is not settled law, his show becomes as controversial as it is popular. Despite increasing danger, Bassem employs comedy, not violence, to comment on hypocrisy in media, politics, and religion. Tickling Giants follows the “Al Bernameg” team as they discover democracy is not easily won.

Hosted by Amnesty International and The Spindle.

This site uses Akismet to reduce spam. Learn how your comment data is processed.